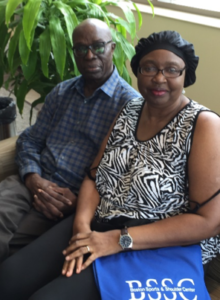 Kadija and Kashope Wellington are missionaries in Sierra Leone (SL), part of the Missions Door City Church Planting Team that Paul Bothwell leads here in Greater Boston. They are examples of the “From There to Here and Back” rubric that we are seeing more and more often now in God’s worldwide missionary work.

Kadija and Kashope both fled from the brutal civil war in Sierra Leone in the 1990’s. They met here in Boston. Kadija was a Muslim, Kashope a Christian. Kadija became a Christian here and they married. After the war ended in 2003 they followed God’s clear call to return to Sierra Leone to begin reconstructing the dismembered remains of the country. “From There to Here and Back”… with a bit of help through Missions Door.

In a most devastated part of Sierra Leone, Kadija set up a primary school for local children. She formed a vocational center for war widows, teaching women skills for living. She gathered youth for learning groups teaching healthy living and Life in Christ

Kashope planted a church, and painstakingly grew an outpost of God’s Kingdom, engaging with the community’s needs for water, food, shelter, justice, peace – all in a mostly hostile Muslim environment.  They ministered through the Cholera crisis and then the EBOLA crisis. Both Kadija and Kashope were heroic indigenous missionaries.

Then Kashope became critically ill with cancer, Kadija was fading from exhaustion, and they began closing parts of the ministry. Through Missions Door, they were able to come to Boston for medical care in November 2016, with Kashope near death.

Now they’ve been in Boston for 10 months. God has MIRACULOUSLY given life back to Kashope and Kadija. They long to return to SL as soon as medically possible.

They are finally returning to SL – scheduled to fly September 30!

They return to some serious losses. Their house and church building in SL have been broken into, looted, ransacked. Recently a massive mudslide and flooding ravaged the nearest city (Freetown), killing over 1000 people – family members, church leaders, friends. They are devastated.

However, through ALL that has occurred, they have maintained a ruthless trust in God’s goodness and a demonstration of “Forth in Thy Name, O Lord, I go, my daily labor to pursue;” as their habit of life.

They badly need some “long-term money” to take back with them, for restoring their house, the church, the school; and helping flood-devastated families rebuild. This will demonstrate the Presence and Power of God dramatically in the Muslim culture.

We can help.
Let’s Give Ourselves Away for God!

Can we contribute toward a $5000 gift for them to take to Sierra Leone?
This will impact thousands of people and will lift up God’s Name.

You can give online through Missions Door. Go to
https://www.missionsdoor.org/missionary/wellington-kadijatu/
and click on Donate.